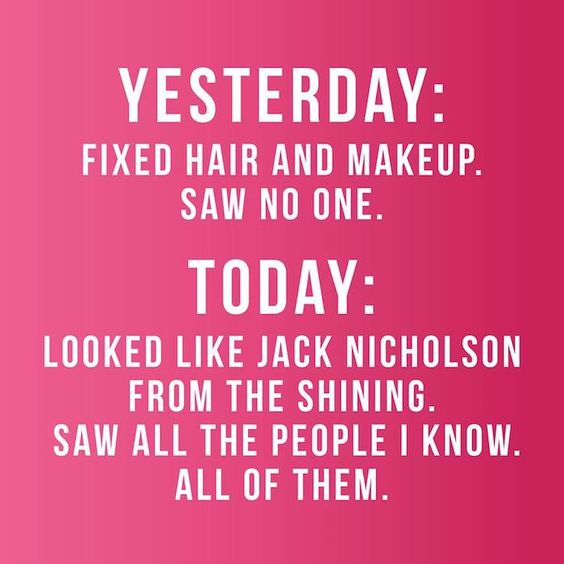 It never fails that when I am trying to get ready to leave town, I get some sort of raging upper respiratory crap.   As a family, we share everything, so this has made the rounds.  Last night, my bedside table resembled a pharmaceutical display.    The smell of Vick’s permeated the air.

I ran errands yesterday in the hopes of putting a dent in my “vacation to-do list”.  With my shiny red nose from all the wiping and blowing plus the no makeup because frankly, I didn’t care, I looked like hell.   I probably looked worse than I felt, but it boggles the mind that people always want to strike up a conversation when you look your worst.  The cashier at the store was chatty as she checked out my items.  Asking me about my day, which is delightful and very customer service oriented, but annoying as hell when I just wanted her to hurry up and to stop making eye contact with me.   I can only imagine that her thoughts were, “Wow, she is really confident going out looking like an escapee from a mental institution,” or perhaps, “I really hope the mental institution knows they have an escapee,”.  Honestly, it could go either way.

The same thing happened at the cleaners.  But, this place actually knows me. They have seen me look a whole lot better, so if facial expressions where words, they would have sounded something like, “Oh, wow, Mrs. Jones looks like shit,”.   Finally, after finishing a few more errands, I decided it was time to give society a break from having to look at me.   It was Monday and that tends to be a challenge in itself.  Nobody else needed to encounter the lady who looks like she has been on a bender.

And even when I picked up Bailey, he looked at me like I was hideous and instead of asking, “How are you feeling?”, I got, “did you get me some googles?”.  Nope, no googles in the sea of Easter hell.  Unless you wish to use those hideous Peeps or a big stuffed bunny, there are no googles to be found.  If I am being completely honest, I didn’t even look.    I was too busy buying items that would drain the flood of mucus that was residing in my head to even focus on the google issue.   Gee, I am pretty sure we can find some at the beach, so really not worried about it.

All I am saying is that when the testosterone men in this house get sick, the world stops, whining starts, and you would think that no one else has ever suffered the way that they are.   Of course, that is my perception and that can be skewed when I am not feeling one hundred percent.     What I do know is that Vitamin D is on order and the beach will definitely be the dose of medicine I desperately need.