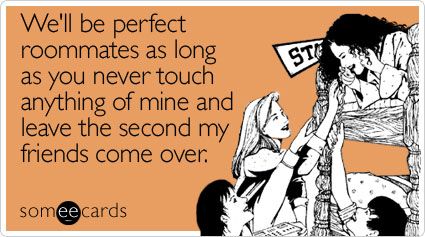 “I’m scared. There is someone else’s stuff in my room.” This is the first sentence uttered as my youngest calls me from college last night. For the last month, he has had no roommate. His original one went MIA. Since then, he was hoping that he would simply float under the radar and be on his own for the semester. “So you finally got a roommate?” Bryce can be a little dramatic. I blame his father, but the fact remains is that it is a little disconcerting for him. “This will be great. Keep an open mind. You might be great friends.” His response was, “Or he could be a psycho.” Yes, there is that option as well. We chat for a bit longer. Every noise he hears convinces him that his roommate is entering. He is miffed at the Playstation 4 taunting him as he is an XBOX connoisseur. The survey of the items left, have given him a sneak peek into this unidentified human being.

I think this could be a great reality show. Unsuspecting college students have to guess what their roommate is like based on the items left in the room. Of course, someone’s material goods aren’t always a good indicator of the individual. Take Brian’s hideous “macrame-project-gone-wrong” sweaters. If I judged him based on his awful taste in clothing, I would have missed out on a terrific man.

Before I hung up with Bryce, I gave him the pep talk “open mind, open heart” which I am sure he tuned out while his eyes bore into the Playstation 4 that he detests. When I got up this morning, there was a cryptic text from him that read, “I will call you later with more information”. It was like we are on some CIA mission. So stay tuned. I am sure it is about to get interesting.